Martial arts like Karate and Tae Kwon Do are passed down from teacher to student. They are earned through patience and constant training. They are preserved by passing on those hard earned lessons through teaching new students. We all stand on the shoulders of the masters who came before us.

Kim Studio originally opened its doors in 1964. Very few martial arts schools in the United States have enjoyed the same longevity but we are still going strong! Kim Studio has been a part of Montgomery County and the Washington Metro area since 1964, when Ki Whang Kim founded it in Silver Spring.

Grandmaster Ki Whang Kim passed the traditions of hard training to Grandmaster James K. Roberts, Jr. who preserves them to the present day at the Kim Studio Rockville dojo.

Grandmaster Ki Whang Kim was born in Seoul, South Korea in 1920. He was the son of wealthy parents, who were actively involved in the shipping industry. As a child, Grandmaster was often subjected to harassment from his peers because of his family’s wealth, and this caused him to become obsessed with learning how to defend himself, at a very young age.

During his teen years, Grandmaster moved to Japan, where he studied Judo and eventually attained the rank of black belt. While studying at the Nihon University in Japan, Grandmaster began studying Shudokan Karate, under the instruction of Kanken Toyama. After graduation, Grandmaster continued his studies of the martial arts by traveling to China where he studied Kenpo, and Shaolin Kung Fu.

In 1964, Grandmaster emigrated to the United States, where he opened his first Karate schools in Silver Spring, Maryland, and at the YMCA in downtown Washington, D.C. At that time, Grandmaster was affiliated with the Tang Soo Do Moo Duk Kwan Association, serving as its ambassador in the United States. In later years, Grandmaster devoted much of his efforts toward unifying several Korean fighting arts under the name Tae Kwon Do.

While Grandmaster was a very accomplished tournament organizer, he believed that tournament competition was only a small part of being a martial artist. Indeed, in his promotion of tournament competition, he was not one to seek the limelight for his own purposes, but only to the extent that it promoted the best interest of martial arts. His way was to emphasize the spiritual aspects of karate-do, the development of good moral character, and thus well rounded human beings. Grandmaster placed great emphasis on racial and cultural harmony, and his student body reflected those values at all times.

In addition to a black belt in Judo and Tae Kwon Do, Grandmaster held 8th Dan in Tang Soo Do, and a black belt in Aikido. He taught for over thirty years, and was inducted into the Black Belt Hall of Fame in 1979. That same year, he was selected as Co-Instructor of the Year. In 1971, Grandmaster was promoted to 9th Dan by the Korea Tae Kwon Do Association. In 1993, while hospitalized with terminal liver cancer, Grandmaster was received his 10th Dan from the Korean Tae Kwon Do Association, as a symbol of his lifelong dedication to martial arts and to Tae Kwon Do in particular. He passed away on September 16, 1993. 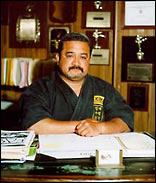 Grandmaster J.K. Roberts, Jr., a native of Hawaii, has trained and taught in the martial arts for over three decades. His numerous honors include over 300 Grand Champion trophies in forms, sparring and weapons competitions. Grandmaster Roberts also holds the unique distinction of carrying the Madison Square Garden Forms Champion title for eleven consecutive years. In 1991, he was promoted to 7th Degree Black Belt and awarded the position of Master Instructor from his teacher of 25 years, the late Grandmaster Ki Whang Kim; in 1998 he was promoted to 8th degree and awarded the position of Grandmaster. In 2014, at the 50th anniversary of Kim Studio, he was promoted to 9th degree by Grandmaster James K. Roberts Sr.

Since 1971, Grandmaster Roberts has been devoted to passing on the traditions of the martial arts to KMU students as well as at The American University in Washington, D.C., where he has been adjunct professor for more than 28 years. Grandmaster Roberts teaches at Kim Studio Rockville on Tuesdays & Thursdays at 6 and 7:30 p.m., Fridays at 7:30 p.m. and Saturdays at 11 a.m.; he teaches at American University on Mondays and Wednesdays.

Master Ann Roberts has trained in the martial arts since 1968, and, in 1998, achieved the rank of 6th dan and became a master instructor. In 2014 at the 50th anniversary of Kim Studio, she was promoted to 8th dan by Grandmaster James K. Roberts Sr. Additionally, she has served as an adjunct professor for martial arts and personal defense at The American University in Washington, D.C. for nearly ten years. Over the past three years, Master Roberts has developed a unique program to enhance the abilities of physically challenged students through the study of martial arts. In partnership with the Easter Seals Society, she will continue to expand this highly successful program. Master Roberts teaches the juniors classes at Kim Studio Rockville on Tuesdays and Thursdays at 4:30 p.m.